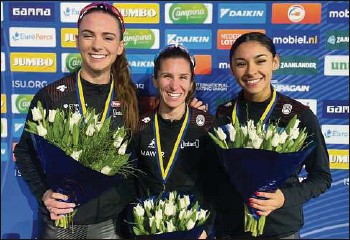 In her first-ever ISU long track speed skating World Cup team event, Prince George native Carolina Hiller lived up to her end of the bargain and helped Canada pave a path to the medal podium Saturday in Heerenveen, Netherlands. The 25-year-old product of the Prince George Blizzard Speed Skating Club joined forces with Ivanie Blondin of Ottawa and Brooklyn McDougall of Calgary to win the silver medal in the first team sprint of the season. “Winning silver with Carolina and Ivanie today was very special,” McDougall told Speed Skating Canada. “We hadn’t practiced together before the race, so we are all very happy with the outcome. It’s exciting to race team sprint with the girls again and I think we will be even better with more practice. This was also my first senior World Cup medal, so I am very proud of myself. I will be taking this momentum into tomorrow’s 500m.” Laurent Dubreuil made it a two-medal day for Canada when he raced to gold in the 500m. Dubreuil, from Levis, Que., had to reset after being charged with a false start, but got off the line quickly in the 500 en route to a time of 34.34 seconds. “It was a really good race,” Dubreuil said. “I am happy with my first victory of the year and the way that I skated today. The time to beat before I raced was quite difficult to chase, but I was able to stay focused on my goal of skating to win. “I had a much better start than last week and then an excellent lap. The final corner was the best of my life in the 500.” Japan’s Wataru Morishige (34.44) was second, while Merijn Scheperkamp of the Netherlands (34.69) took bronze. Christopher Fiola of Montreal finished eighth and Cedrik Brunet of Gatineau, Que., was 19th. After two events, Dubreuil sits atop the World Cup standings in the distance. In the women’s team sprint, Hiller, McDougall and Blondin got off to a slow start, but quickly closed the gap in the three-lap race. By the time Blondin stopped the clock in 1:27.45, her quick final lap had earned Canada the silver medal. The World Cup medal was a first for Hiller and McDougall. The Dutch team (Antoinette de Jong, Marrit Fledderus, Femke Kok) crossed the line in 1:26.57 to win gold, while the Americans (McKenzie Browne, Erin Jackson, Kimi Goetz) captured bronze (1:27.72). In other Canadian results, Blondin placed fifth in the women’s 1,500m, while Beatrice Lamarche of Quebec City was 16th and Alexa Scott of Clandeboye, Man., was 18th. In the men’s 5,00m, Graeme Fish of Moose Jaw, Sask., was ninth and Jordan Belchos of Markham, Ont., was 13th. The event concludes Sunday with the men’s 1500, women’s 500, women’s 3000 and men’s team sprint. The races will be streamed live on www.cbc.ca starting at 4:30 a.m. PT. Hiller, a fourth-year kniesiology student at the University of Calgary, locked up her spot on Canada’s World Cup team when she won the 500m race at the national trials in Quebec City. On Nov. 11 in Stavanger, Norway, the College Heights graduate competed in her first World Cup race and finished 16th in the women’s 500m event. Hiller is also scheduled to compete in and back-to-back World Cup events in Calgary (Dec. 9-11, Dec. 16-18).