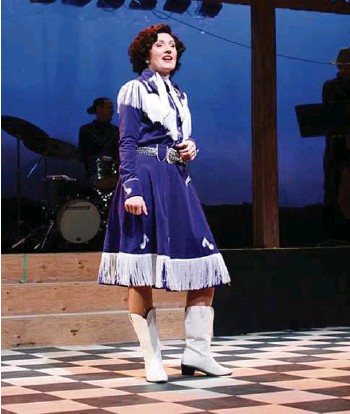 Always… Patsy Cline is the true story about how a super star singer and her super fan became fast friends after they met one fateful night and spent years corresponding through letter writing. Theatre NorthWest presents the play by Ted Swindley from Nov. 24 to Dec. 14 that sees the story unfold through Louise Seger’s narrative and Patsy Cline’s songs. The role of Louise Seger is played by Laura Jaye while Sarah Horsman takes on the roll of Patsy Cline. “She’s pretty sassy,” Horsman said about Cline. “And definitely stands up for herself in a lot of ways and for women to do that in the industry in that time was kind of unheard of so she paved the way for a lot of musicians that we hear today, especially females.” Horsman grew up singing a lot of different types of music. “So I guess I bring a little bit of everything into the show,” Horsman said. “I love singing Motown, I love singing R&B, classic rock. I’ve done a lot of that kind of stuff along with my musical theatre training so that definitely lends itself to being able to meld those different styles together and also take on other people’s vocal-isms because Patsy certainly has a very distinctive voice to bring to the table.” This is Horsman’s first time to Prince George as she’s mostly performed in Ontario and Alberta during her extensive musical theatre career. “My experience has definitely prepared me to sing a 27-song show,” Horsman said about performing in Always… Patsy Cline. “It’s an undertaking for sure so there’s a lot of taking care of yourself and your voice in the theatre, that’s for sure.” Besides the live band, there’s only two characters on stage telling this story of friendship between Louise and Patsy. “There’s just Laura and myself – just the two women – and she’s got her own marathon of text and guiding everybody through this wonderful story of Patsy Cline and her love of her music and having this one wild night where she meets Patsy Cline and they become friends and pen pals and after only one night and that also tells us who Patsy Cline was – she was very much appreciative of the people around her and those who took care of her. So it’s a pretty big show for two people to take on.”