To the relief of everybody involved, the big storm predicted to dump up to 10 centimetres of snow on Prince George Saturday morning failed to materialize, but the Vernon Panthers still found a way to bury the Duchess Park Condors. They took advantage of ideal November weather conditions and dug their cleats into the lush green fieldturf carpet at Masich Place Stadium to lay a thumping on the hometown Condors, a convincing 31-7 win that paved the way for the Panthers to advance to the B.C. Secondary Schools Football Association double-A varsity North/Interior championship game. The Condors looked great to start, gaining major momentum from the powerful legs of tailback Noah Lank, whose determination led to the opening touchdown of the game on the Condors’ second drive. Playing in what would be his final high school game, Lank found the holes to make some major gains and got the Condors down to the Panthers 34-yard line. On third down, Aiden Lewis hauled in a 35-yard touchdown pass from Quinn Neukomm on the last play of the first quarter. Euan Murray made good on the convert for a 7-0 lead. A fumble recovery set up the first Vernon touchdown. Braden Khankhun tackled Murray on a punt return and the ball popped out of Murray’s hands and Khankhun fell on it, giving the visitors the ball on the Duchess 33-yard line. On the first play of the series, quarterback Jake Farrell found Landon Janke for a 12-yard pass and Farrell went right back to the air again to hit Kolbe Thorpe for a 15-yard gain to the six. The Panthers worked the ball to the two and on a bit of a trick play, receiver Khankhun took the snap and pushed the pile in front of him over the goal line. The convert failed and Duchess Park clung to a 7-6 lead. Near the end of the opening half, Murray was forced to punt from his own five-yardline and managed to get the kick away but was roughed up by an oncoming Panther, which gave the Condors the ball with a first down on the Duchess Park 33. A couple plays later, Neukomm handed off to Lank, who was hit by Roan Reid and fumbled. Reid recovered and that led to an 18-yard touchdown run for Joe Murphy. Reid added the two-point convert and the Panthers took a 14-7 lead into the locker room. Farrell and Murphy became the Condors’ worst enemies in the second half, leaving Duchess Park tacklers grappling at air as they ran roughshod over them. Farrell converted a third-and-15 situation with a pass play to Reid that covered 18 yards into the end zone and Mitchell Bond booted the convert to increase the lead to 21-7. The Condors’ fate was sealed with about three minutes left in the third quarter when Lank was denied a touchdown from seven yards out. Lank dove and appeared to break the plane of the goal line as he stretched out with the ball, but the officials ruled he was down at the one-yard line. On third down, Neukomm’s pitch to Lank hit the turf and he had to cover the ball for a three-yard loss and that led to sideline pass to Lank that was swallowed up by Panther tacklers with no Condor blockers in close vicinity. It was a gut-wrencher for Duchess Park and they never recovered the gusto they displayed through much of the first half. A holding penalty negated another Vernon touchdown five minutes into the fourth quarter and they had to settle for a 20-yard field goal from Bond, who took the place of starting placekicker Janke, who was injured in the first half.The Panthers had great success moving the ball in the fourth quarter and their defence also came up big when Reid picked off a Neukomm pass with 7:45 left on the clock. That set up the final scoring play, a 25-yard quarterback sneak from Farrell into paydirt. The Panthers will now await the winner of next weekend’s Kelowna-South Kamloops playoff to determine who will advance to the North/Interior final, to be played Dec. 3rd or 4th at an unspecified site. The highway closures as a result of the major rainstorm that swamped southwestern B.C. earlier this week forced the B.C. Secondary School Football Association to scrap its annual Subway Bowl provincial championship games. Instead, there will be two regional championships in the double-A division – North/Interior and Lower Mainland/Vancouver Island. 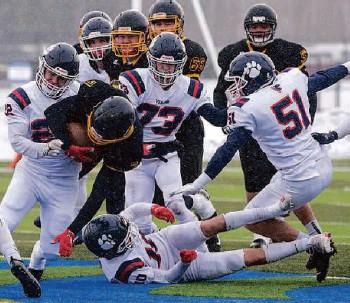