Blake Astorino woke up early last Monday morning in his basement bedroom in Merritt not knowing one of the scariest days of his life was just beginning. Rushing water from the flooding Coldwater River a short distance from the house had risen over the banks and was creeping towards the house in the south end of Merritt where he’s been billeted as a member of the Merritt Centennials hockey team. His billet mom, Jenny Pierce, told Blake to start packing up his belongings and reminded him to gather up his suit and dress clothes because the Cents had a game scheduled for Wednesday in Penticton. The 20-year-old forward phoned his parents, Patty and Ed, in Prince George to let them know what was happening and started loading what he could into his Honda Civic, while Jenny and her husband Jesse grabbed what they could to pack into their SUV and travel trailer. It was just past 5 a.m. and the flood waters hadn’t reached the end of the driveway but within 15 minutes, nature’s fury was lapping at their feet and waves rippled as a torrent of rising water enveloped their yard. As a third-generation Merritt resident, Jenny knew the house her grandparents built was prone to flooding occasionally, because it was only a short walk from the river, and Jesse told Blake they would likely be back later that day when the water level dropped. But it didn’t. “I didn’t really pack as much stuff as I probably should have, and when I looked outside the water was starting to get a little worse, but it wasn’t serious,” said Astorino. “So I went back to my room for a bit and I heard (Jenny) yelling, ‘OK, we’ve got to go, we’ve got to go,’ and it happened within five minutes. It was like nothing, to water almost in the house in 20 minutes. It was coming so fast and the water was strong.” By the time Astorino got into his car, the rushing water was already lapping at the doors and as soon as he backed out of the driveway and started down the road his car was half-submerged. “It was pretty scary for me because my car is so low to the ground and the water was coming up to my windshield and going over the roof,” Astorino said. “If I had left any later I would have been stuck. Luckily, it didn’t stall and I got out.” The players have found new billet homes in Kamloops. Astorino is living with head coach and general manager Dave Chyzowski, his wife Cindy and Cents players Deegan Mofford, Ryan Mulrenin, Keegan Maddocks, Will Bowman and Connor Farren. “I feel bad terrible that Blake is in Kamloops, he’s a part of our family now and this is the second year we’ve billeted him and now he’s not with us at a traumatic time,” said Jenny. “I’m not sure he realizes the severity of our home. Where his bedroom and his space is, that doesn’t exist anymore.He’s so kind and such a likeable guy and we’d sure love to have him back, but without having all of our house intact I don’t think we’ll be able to. I don’t think my kids realize that and when we all wrap our heads around that it’s going to be heartbreaking. We really lucked out with Blake.” Jesse Pierce is a helicopter pilot who has been working overtime dealing with emergencies brought on by the flood that has also swamped Princeton and Abbotsford. The rainstorm has destroyed part of the bridge in Merritt over Coldwater River and took out entire sections of Highway 8 west of the city. He flew over his neighbourhood on Monday and took photos which show his house and Merritt Secondary School across the street completely surrounded by water. According to Jenny, the high school will remain functional but nearby Merritt Central Elementary School has suffered significant damage. “It’s unfathomable, and you start to think about what you left behind, stuff that may be irreplaceable,” said Jenny. “But as I sit around with my family and my pets, then you also realize that’s just stuff and I have what I need.” 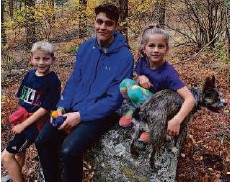